The 2019 Nouveaux alchimistes line up.

The Nouveaux alchimistes section (New Alchemist) presents a selection of films that push the limits. Films by artists from various disciplines (film, video, visual arts) who are using cinéma to further develop their unique voice. Films that stand out for their images and sound, their editing and storytelling. Films that break the rules and explore the boundless creative potential that the medium offers. For its 48th edition, and as part of its New Alchemist competition, Festival du nouveau cinéma present 11 feature film 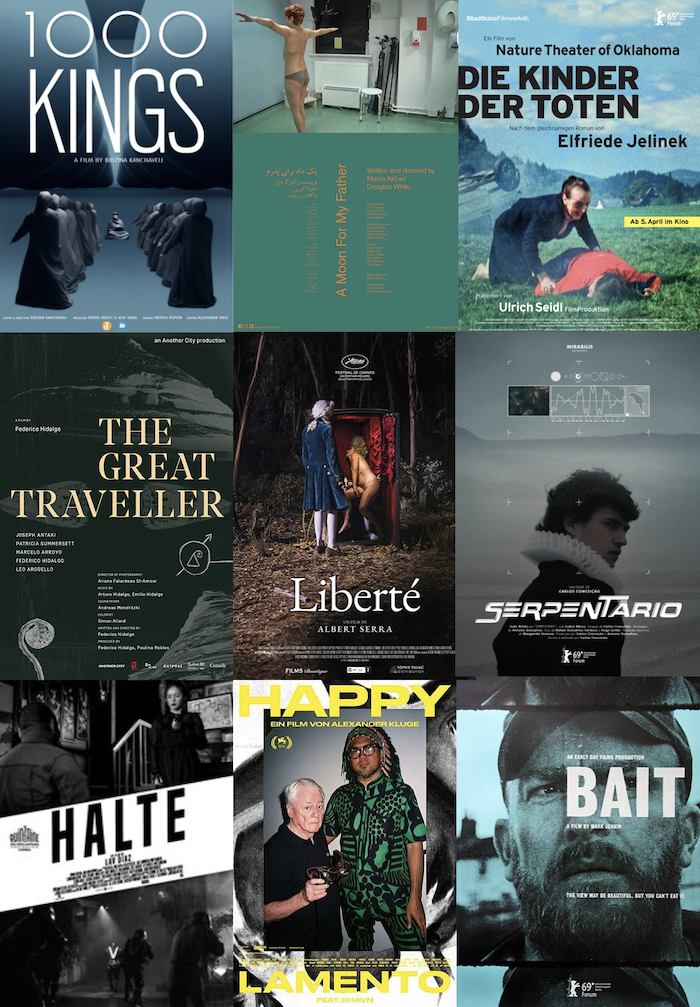 In a society peopled by abstract figures, a thousand balls are encaged in a giant space, distinguished only by their social status, like a beehive. Their single aim is to produce light. A conceptual, poetic animation on the origins of life, the universe and more.

A MOON FOR MY FATHER

Between performance and the sculpture of female body, artists Mania Akbari and Douglas White ponder individual and collective memories through letters and images. A lyrical essay both intimate and universal.

In a small fishing village, traditional practices are disrupted when tourists arrive from London. A tale of rivalry, tragedy, class divisions, anger and hope, set against the backdrop of a restless sea.

After a fatal accident, Karin returns as an undead spook to a rural Austrian village with a dark Nazi past. This absurdly hilarious silent film shot in Super 8 is freely adapted from the novel by Nobel laureate Elfriede Jelinek.

As absurd and sarcastic as it appears, Alexander Kluge’s latest is a collage of bizarre sketches from films, theatre and circus, and the most outrageous scenes from the film Alipato: The Very Brief Life of an Ember by Khavn de la Cruz.

As absurd and sarcastic as it appears, Alexander Kluge’s latest is a collage of bizarre sketches from films, theatre and circus, and the most outrageous scenes from the film Alipato: The Very Brief Life of an Ember by Khavn de la Cruz.

For five years, Lukas Marxt followed a schizophrenic man living in Lanzarote in the Canary Islands. An experimental portrait where lonely volcanic landscapes externalize a man’s innermost thoughts and feelings through the alchemy of cinema.

“If I were to adopt a bird that lived to be 150, would you take care of it after I died?” asked his mother shortly before dying. The young man heads off in search of the inherited bird, his roots and the history of the countries travelled.

In this mysterious story, travel writer Edgar and his old friend and colleague Bill set out on one last trip together, to write the sequel to their bestseller, written 20 years earlier. The trip is fraught with peril.

It’s 2034. The sun hasn’t come out in the three years since a volcanic eruption plunged the Philippines into darkness. A mad dictator rules a country where millions have died and countless others have fled.

A plane takes Vitalina from Cape Verde to Portugal for the funeral of her husband, who abandoned her long ago. Pedro Costa revisits his characters from shantytowns and immigrant ghettos, with dark imagery and intricate immersions in lost dreams.